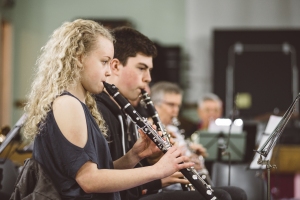 The Training Band was formed in June 2004 with a primary aim of coaching and encouraging youngsters to become more proficient in their playing and experience fun of playing together in a group. Most members of the Training Band are aged 11-18 years of age and are drawn from schools in the Dartford, Gravesham and Medway area.

Adults who have recently begun to learn to play a musical instrument or have returned to playing after a period away are also welcomed to join the Training band.

As a general guideline, musicians should have reached a standard that is equivalent to ABRSM Grade 3 or Trinity Grade 3 although there is no requirement to have passed any music exams. Players are not required to audition! 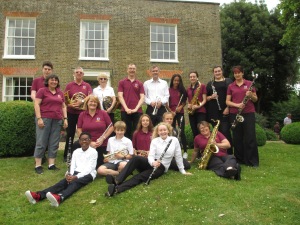 Training Band members are encouraged to improve their musicianship and to develop as capable and proficient musicians and eventually move up to the Concert Band as they become more accomplished.

Training Band rehearsals are held from 18.30hrs-19.30hrs on Thursdays during school term time only in St George’s Church Hall, St George’s Church, Gravesend. New members are welcome to turn up to any rehearsal although prior notice is always appreciated if for no other reason than to make sure that a suitable part is available!

The training band is supported by the Music for Schools Foundation and Bev Prankard, who runs the Training Band with help from other band members.

For further details or to enquire about joining, please come along to a rehearsal, or contact us. New players are always welcomed . We’ll be delighted to see you!